Denver is not the last one!

As promised, with a little delay, I am glad to release Dino Crisis with VGA support. Capcom, who developed the game, were probably in the rush when they decided to release the game. The VGA support was nearly done! What a shame and a waste of time (at least for me). I don't think it would have taken them more than 2 hours to implement and test a full VGA support...

The FMVs are not playing in VGA? Yes but this is not the only issue. When switching from NTSC or PAL to VGA, the resolution gets doubled (320x240 to 640x480). This should not be a problem because the GFX libraries handle those resolutions, you just need to initialize them with the right parameters. The problem comes when you display elements on the screen: to position elements you assign them coordinates, relative to the upper-left corner of the screen. When you switch to a higher resolution, you have to multiply the coordinates of all elements by two. So this means you have to find out where those coordinates are located in the code: basically it's like looking for a needle in hay stack! In Dino Crisis, we have such problem. 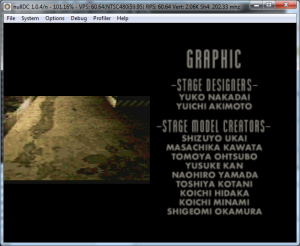 The credits screen when playing with a scart cable 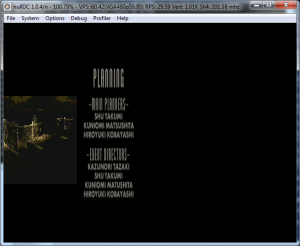 The credits screen when playing with a VGA box (assuming the FMV playback is fixed for VGA)
So yes this game is a little bit of a pain to patch. I am not a big fan of this game and even if I were, when it’s the nth time you start the game, load a save, play few seconds, watch the ending FMV (that of course you cannot skip), you really get bored! On top of that, when you notice that some screens do not behave the same way compare to the rest of the game, it’s hard to be 100% sure that the game is fully patched. That's the case with the credits screen. To avoid killing myself, I had no other choice than hacking the game logic to trigger the end of the game after starting a new game... 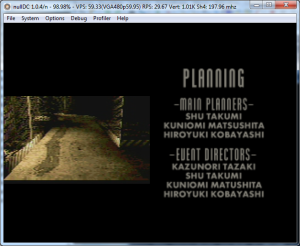 Here is final result, the credits screen patched with a VGA box
The work seems to be done for this version. PAL-FR, PAL-IT, PAL-DE and PAL-ES ones will come later. As they have subtitles that need to be stretched up, it’s a little bit harder to fix. I will talk about it later.

Now it’s time to try it out and make sure everything is working correctly :)

Special thanks to bomb78, who helpt me a lot with the testing!